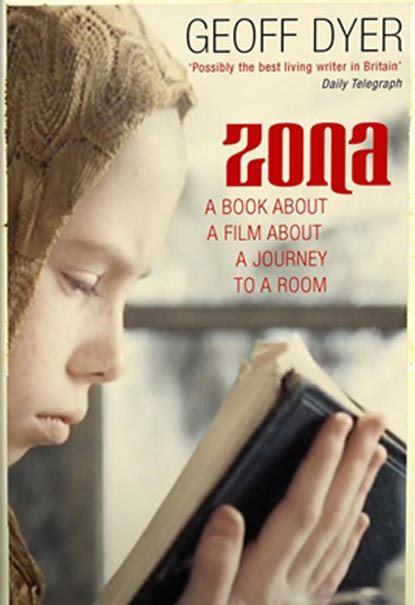 In his latest book, Zona, the unclassifiable British writer Geoff Dyer does just that. The outline of his critical project is so simple that at first it might seem pointless. Basically, Zona is Dyer's 217-page account of everything that whirs through his mind while watching Andrei Tarkovsky's Stalker from start to finish. He dives down tangential rabbit holes, recalls vivid Proustian memories, summons the wisdom of lofty critical theorists, infuses insight with dry-as-toast British humor, and generally meanders along any trail that Stalker leads him down. Zona is criticism, but it's also a performance piece. By the end, Dyer hasn't just fed us information and opinion; he has elevated the internal narratives we all construct while watching films into an entirely new kind of literature. Dyer certainly doesn't lack opinions. He unambiguously loathes Lars von Trier and adores the WWII action flick Where Eagles Dare, for example. But he doesn't serve these opinions up as the final say on anything. They're simply neural firings that occur in his brain while watching Stalker, breadcrumbs dropped by a mind prone to drifting. If Dyer were writing Zona as a traditional review on the four-star scale, it would seem absurd for him bring up Burning Man, his stingy father, and missed three-way opportunities. But these episodes are what makes his book so great. They demonstrate that great films kick our brains into overdrive, mapping interrelations we've never noticed before. When I rewatched Stalker after finishing Dyer's book, I had a new appreciation for how Tarkovsky allowed my mind to wander, even while he completely engrossed me in his film.


If Dyer's criticism plunged me inward, Chris Marker's One Day in the Life of Andrei Arsenevich brought me outwards, showing me how Stalker was a product of Soviet oppression, Russian Orthodox spirituality and Tarkovsky's unique philosophy of cinema. Like Zona, Marker's essay-film works as criticism, yet also exists as a distinct work of art. I'm sure that information on Tarkovsky's battles with communist censors, his religious beliefs and his fastidious directorial style can be found in a million books, articles and websites. But no Wikipedia entry could've ever dramatized those topics as well as Marker's ever-curious camera. Marker's film finds Tarkovsky in exile, bedridden and dying. He embraces his son, who inhuman Soviet bureaucrats have kept away from his father for five years, and Marker compares the poignant reunion with scenes from Tarkovsky's films. Scenes of waiting—scenes of reunion. Marrying poetic narration with evocative collages, Marker examines Tarkovsky's visions of the four elements, Orthodox icons, dilapidation and other pet obsessions. Tarkovsky can sometimes seem like an unearthly director, a rarefied artist untethered to the world beyond cinema. Not true at all, Marker's film reveals. Having seen One Day in the Life of Andrei Arsenevich, I know that I'm better able to understand the political, religious and theoretical grounding in Tarkovsky's mysterious films.

Dyer and Marker both prove that critics can do so much more than award films with little gold stars. Clint Eastwood's line on assholes is right: everyone's got an opinion. The trick is to wield that opinion as a machete, clearing a path that brings others toward deeper understanding of a film. Good critics, in short, are like Stalker himself. They guide us through these cinematic Zones, steering us away from criticism's typical boobytraps—confusion, shallowness, narcissism. They don't simply pronounce, "This Zone is good" or "This Zone is bad." They help us plumb depths we would've never reached on our own. Or, as Dyer writes in Zona:


If mankind was put on earth to create works of art, then other people were put on earth to comment on those works, to say what they think of them. Not to judge objectively or critically assess these works but to articulate their feelings about them with as much precision as possible, without seeking to disguise the vagaries of their nature, their lapses of taste and the contingency of their own experiences, even if those feelings are of confusion, uncertainty or—in this case—undiminished wonder. (151)