Fashioning The Original From A Copy: On 'Certified Copy' and 'Vertigo' 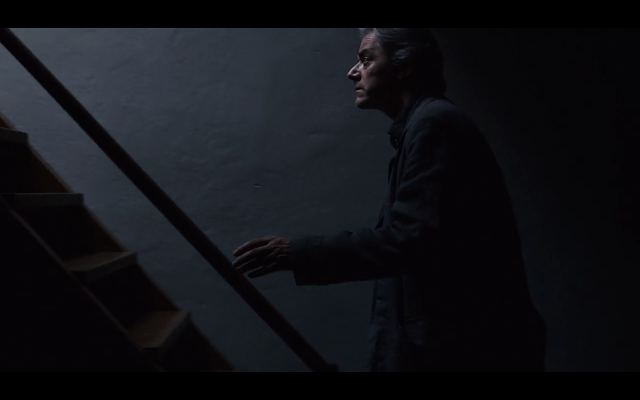 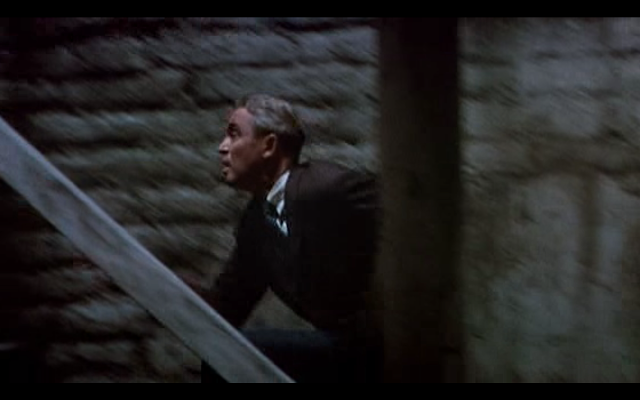 Disclaimer: This post contains so, so many spoilers, and it probably won’t make a shred of sense unless you’ve seen both Certified Copy and Vertigo.

At their core, riddle-films are cinematic questions -- ones that require viewers to come up with answers on their own. Films like Mulholland Drive, Last Year at Marienbad, and even gimmicky blockbusters like Inception may seem indecipherable on first viewing, but they’re not total enigmas. Those willing to do the painstaking, obsessive detective work these films demand will find clues for deciphering the films’ central mysteries. There’s a lot of heavy interpretive lifting involved, but never without some kind of pay-off.

In this sense, Abbas Kiarostami’s Certified Copy is a textbook riddle-film.
It asks its viewers: What exactly is the relationship between the characters played by Juliette Binoche and William Shimell? As they stroll through a Tuscan resort town, why do they lash out at each other so abruptly? Why does it begin to seem like these strangers actually share a long and turbulent history together?

No single solution to Certified Copy’s riddle will be definitive or irrefutable. But at the same time, shrugging the film off as incomprehensible is a cop-out. With films like these, it’s important to have an answer, even if it’s not the answer. But be careful not to come up with a wrong answer. Because there certainly are wrong answers.

Many critics arrived at wrong answers simply by asking the wrong questions. “Were they a couple pretending to meet for the first time or a new couple pretending to be married?” asks Roger Ebert in his tepid review of Certified Copy. Mick LaSalle poses a similar either/or question: “Are these people two strangers discovering fascinating clashes and affinities, or have they known each other for years? Are they, in fact, husband and wife?”

This construction is a total red herring. Only two answers to this question are possible – either they’re married, or they’re not – and neither captures what’s actually going on in Certified Copy.*

Here’s my humble opinion about what’s going on in Certified Copy: They’re not married. They’ve never met. But the second half of the film does not depict two strangers pretending to be married. Rather, everything following the scene in the café when the old woman mistakes Binoche and Shimell for husband and wife happens from the woman’s subjective perspective. She’s projecting her desires onto the situation, imagining an alternate relationship between herself and this man she’s just met.

We’re watching Binoche trying (and more often than not, failing) to fashion her ideal husband out of the rather rude stranger she’s actually with. Her bratty son sums it up perfectly when he precociously observes, “I know you like this James and want to fall in love with him.”

Throughout the film, Kiarostami explores the distinction between originals and copies. You can’t miss this central theme -- it’s spelled out right in the title. The characters mostly argue about art: she says reproductions pale in comparison to originals, while he maintains they’re perfectly good artworks in their own right.

But Kiarostami follows this theme into another register entirely, investigating how reality stacks up in comparison to ideals: conceptions about how the world should be. Going into this first date, Binoche holds an idealized version of the perfect husband in her mind. She’d like Shimell to manifest this ideal in reality. She hopes this stranger will turn out to be a faithful copy of the ideal she originally holds in her mind.

But when held to this standard, Shimell turns out to be an unfaithful reproduction. He fails to reproduce the courtyard statue’s support for her. He doesn’t remember crucial details about their honeymoon. He doesn’t shave every day. She’s trying to fashion her original ideal out of an unfaithful copy, and he stubbornly bristles at her attempts to impose this ideal on him.

I arrived at this conclusion due in part to the film’s repeated references to and resonances with Alfred Hitchcock’s Vertigo, another film about trying to fashion an ideal partner out of a real person. The parallels between Shimell/Binoche and Scotty/Judy are uncanny. Don’t believe me? Let’s compare some stills. 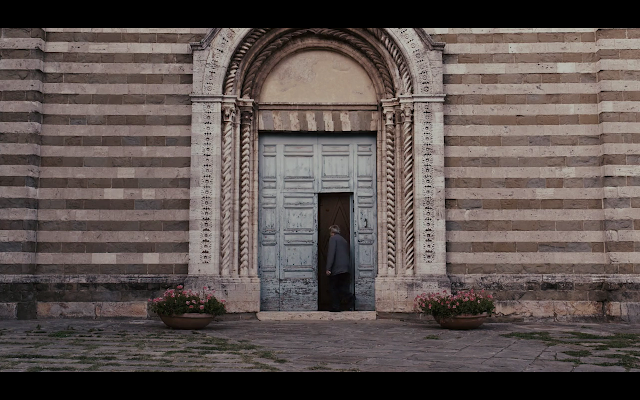 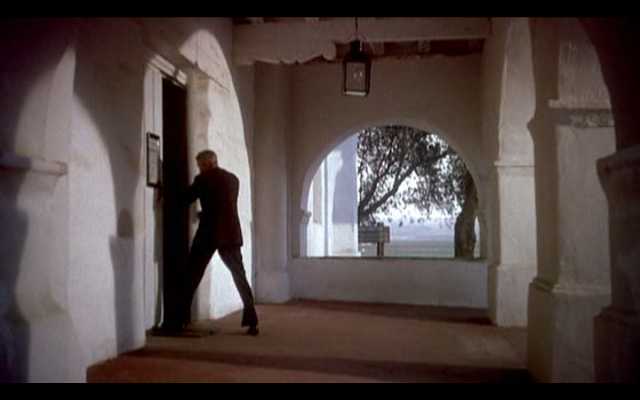 On the top, Shimell reluctantly follows Binoche into a church. Below, Scotty runs after Madeline, who’s just made a mad-dash into the church of Mission San Juan Bautista. The subtle rhyme between these two scenes primed me to notice more obvious similarities between Certified Copy and Vertigo later. 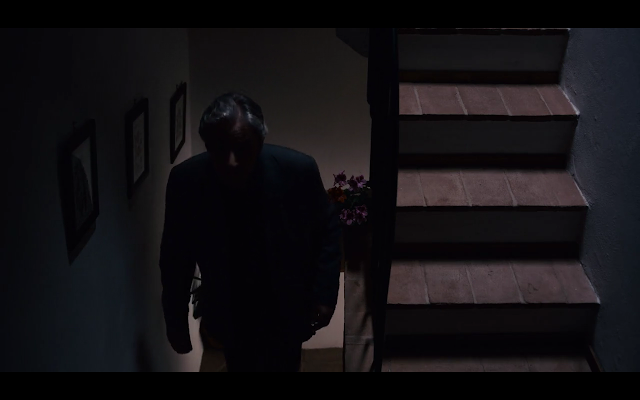 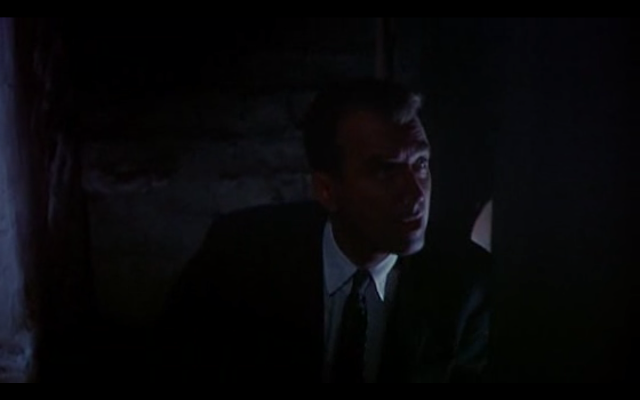 Here’s a useful rule of thumb: whenever a film shows a man trailing a woman up a twisty flight of stairs, it’s a Vertigo reference. What Citizen Kane did for sleds, Vertigo did for staircases. By incorporating this image into Certified Copy, Kiarostami is practically begging you to think about the connection between his film and Vertigo. 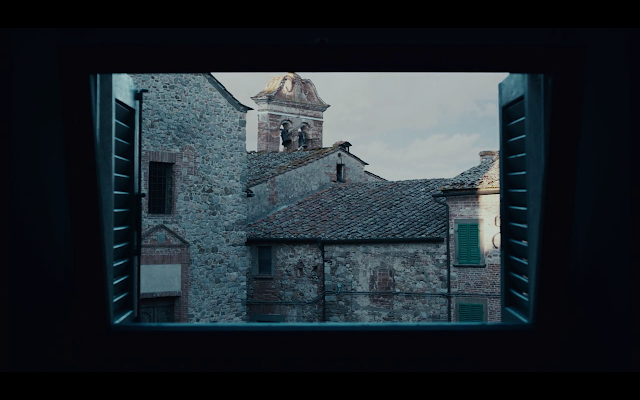 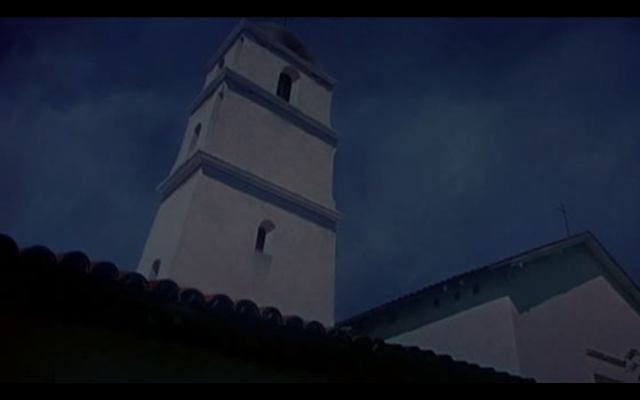 In case you still haven’t caught the connection, Kiarostami echoes Vertigo’s iconic bell tower in Certified Copy’s final shot. These aren’t cinematic coincidences, and Kiarostami isn’t just treading in Vertigo’s visual territory. He’s also exploring the same premise: two characters that may or may not have a history together meet, and one tries to make the other one over. 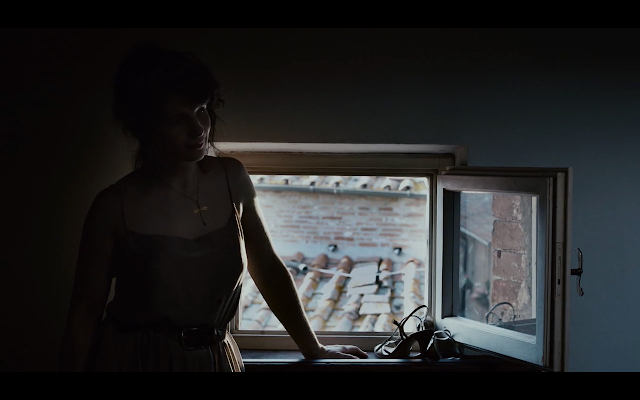 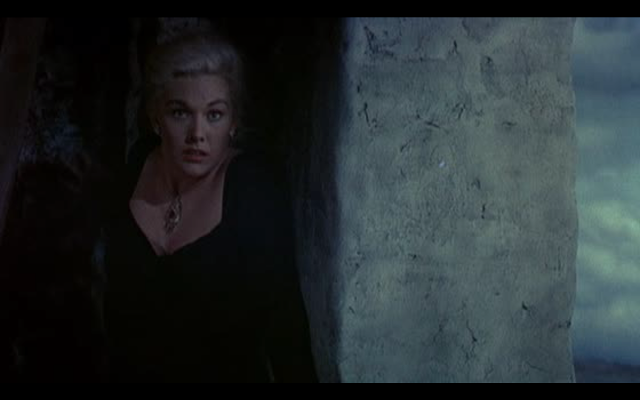 This isn’t to say that Kiarostami recycles Hitchcock’s ideas. He actually reverses many of Vertigo’s tropes, finding fresh takes on old themes. For instance, in Certified Copy the character doing the makeover is a woman, while the one with all the agency in Vertigo is a man. Scotty violently shoves Judy up the steeple’s staircase at the end, but Binoche is far gentler. She calmly leads Shimell upstairs to their honeymoon hotel room. The final scenes in Vertigo reach a fever pitch of madness, deceit and manipulation, but the tone of Certified Copy’s conclusion is plaintive, wistful and meditative.

Kiarostami’s most significant reversal, though, comes in the film’s final scene. In Vertigo, Scotty never managed to make Judy into the woman he originally desired, and his pursuit of the Madeline ideal led to her tragic death. No one dies at the end of Certified Copy. As is typical in Kiarostami films, it actually has a somewhat happy ending. It’s ambiguous, sure, but there’s a slight tonal shift upward.

Binoche has been complaining about Shimell’s lax shaving regimen throughout their date, which falls on a no-shave day. His stubble constantly reminds her of his shortcomings; it measures the gap between the original and the copy. But in the final shot, that haunting moment that we watch Shimell gaze out toward us, he’s clean-shaven. 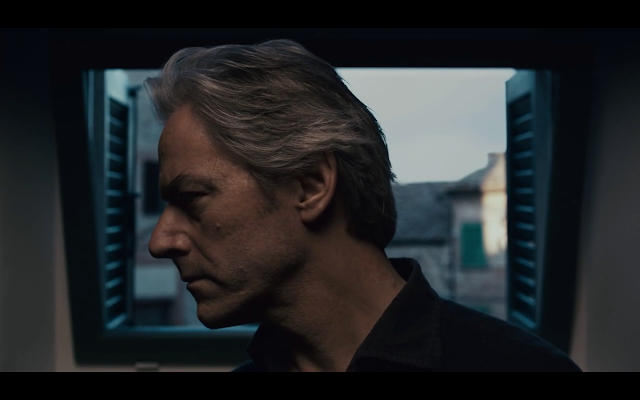 All of a sudden, he becomes a faithful reproduction of her ideal husband. He becomes, quite literally, the man of her dreams. But -- through some divine hand – Binoche gets the man she originally wanted. What should we make of this ending? We never see Shimell shave, so how did his beard vanish? I’m not sure.

Anyone know the answer?

*If you need the nit-picking details about why neither of these answers work, join me for some debunking:

The first answer – they’re strangers who start to act like a married couple as their date progresses -- seems incredibly flimsy to me. One’s disbelief has to be suspended pretty damn low to imagine that two strangers would spontaneously agree to engage in such elaborate (not to mention upsetting) marital role-playing. And how do they know so much about each other? Or rather, how do both make up the same fictional history of their marriage on the fly? I could imagine someone arguing that Kiarostami uses these paradoxes to make some sort of statement about the kinship between acting and lying, or how cinema is just a big game of make-believe. But I suspect he’s up to something much more interesting.

The only other conclusion to be drawn here – they’re a married couple who pretend to be strangers at the outset of this date, perhaps in some attempt to rekindle their dying marriage – is demonstrably wrong. Later in the film, Shimell chastises Binoche for falling asleep at the wheel while driving their son to visit him in Rome. This situation violates the logic of an earlier scene in the film, when Binoche’s son teases her for having a crush on Shimell. If you’re going to make the argument that they were married all along, you’ll have to come up with some really goofy reason as to why the son doesn’t recognize his own father, even though he’s visited Shimell regularly according to the couple’s later arguments. There’s a plot-hole here that can’t be plugged.

Posted by David Rudolf Wagner at 11:49 AM