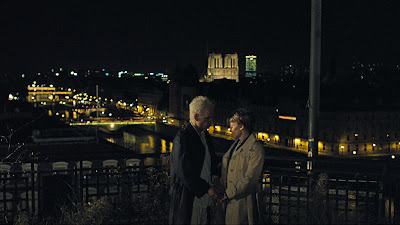 One of Oscar’s assignments calls for him to dress up as a motion capture performer and participate in a movie shoot. The actress who he encounters on the set: is she a performer like him, or just a “regular” actress? As we later learn, many of Oscar’s engagements seem to be with other performers, so it’s hard to say.

When he meets with someone who seems to be his employer, the dialogue explicitly turns to the question of performance. Oscar does what he does for “the beauty of the act,” but his employer says beauty is in the eye of the beholder, and Oscar laments that the beholder is disappearing. Thus, the performances blend in with unstaged reality — no audience implies no performance, and the actors become their roles. Yet, paradoxically, this judgment can only be made by an observer …

2
Music takes on a narrative dimension in a few of the film’s episodes, most notably the Entr’acte and the musical number performed by Oscar’s old flame (Kylie Minogue). But it also plays a metaphoric role — in Oscar’s performance as the frustrated father picking his daughter up from a party, the car that serves as one of his props comes preloaded with music by Sparks, a group preoccupied with pantomime and absurd false signification. It’s a small but charming touch, and adds levity to Oscar’s otherwise dour assignment.

As for the Entr’acte: Each of Oscar’s appointments is informed by a sort of dossier left on the seat of his limo, but at one point all he finds is some sheet music labeled “Entr’acte,” at which point the movie cuts to a lively musical interlude with Oscar leading a gang of accordionists and other musicians. It’s by far the most structurally meta moment of the movie: “Here, time for the intermission!” Not only is Oscar acting in the real* world, but perhaps he is acting in the movie Holy Motors. If you’re willing to follow this paradoxical question, is it Denis Lavant playing Oscar in the film? Or Denis Lavant playing Oscar, who is in turn playing other characters in the film?

Later, between appointments but still attired in the makeup of his previous encounter, Oscar happens upon an old lover (Minogue), also a performer in a matching white limo. Her feelings are in part expressed in a nostalgic, incredibly cheesy musical number, featuring lyrics co-written by the Divine Comedy’s Neil Hannon. This cinematic performance, outside the scope of an “appointment” suggests these actors can’t stop acting; furthermore, they live their lives in an elevated, scripted context. 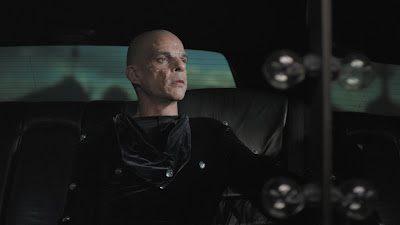 As many have noted, Holy Motors operates in a sort of pan-cinematic matrix of allusions and echoes. Oscar’s chauffeur, Céline, is played by Edith Scob, who ultimately dons her iconic mask from Franju’s Eyes Without a Face. The film’s original Cannes poster was a charming knockoff of past Palme D’or winner Uncle Boonmee’s ghost monkey poster.

It’s also in conversation with at least one other Carax work: his segment from the film Tokyo!, which featured Lavant as a mischievous creature named Merde. Merde, an Ubu-esque babbling monster who eats anything insight, is one of Oscar’s persona’s here, and so we get back to that paradoxical question — was it, in fact, Oscar performing in Tokyo!? Does Carax conceive of this character as existing outside the confines of this film?

Carax seems to have submerged his work in a cinematic mythos, curiously not unlike what Quentin Tarantino does to create continuity between his movies. But Carax’s version is infinitely more playful than Tarantino’s box-ticking, name-dropping mode of referentiality — Holy Motors is interested in inhabiting and reanimating other film-spaces, rather than simply reminding viewers of them.

4
2012 is the year of the limousine opera. Holy Motors has a kindred spirit in David Cronenberg’s Cosmopolis, another structurally experimental film that takes a limo as the center of its narrative orbit. Indeed, both movies seem to have orbits rather than trajectories — they are moving around within a sphere of ideas, though they never really reach a conclusion. Cosmopolis certainly climaxes and ends more finally than Holy Motors — its protagonist, Eric Packer (Robert Pattinson), progresses past his limo’s return to the garage, but that’s the final gesture of Holy Motors. Motors seems to be presenting just one installment in a cycle, a day in the life.

So what is the importance of the limo? For Cosmopolis, it is obviously a symbol of affluence and status, but it’s also an all-purpose living space. For Packer, the limo plays varying roles, just as Oscar does in his world. It’s an office, a conference room, a bedroom. Oscar’s limo is his dressing room — also a place of business and temporary relaxation.

In both films, the limo-as-liminal-space is an organizing feature of the plot. Within the limo, things happen, things change, people change, people get where they’re going.
I need to write more on this later. Are there other limo operas? 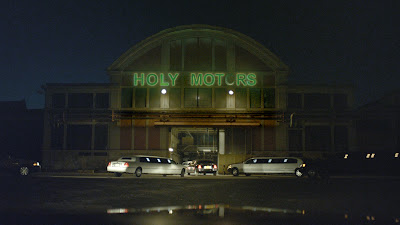 5
The discussion between cars (limos!) in the film’s final scene, at the titular motorpool, draws out one of Holy Motors’ central concerns. One of the talking cars at Holy Motors comments that vehicles will be gone soon since humans want invisible machines; this echoes the conversation Oscar has with his handler, about the disappearing beholder and the ever-shrinking camera. If humans want invisible machines, why are these actors frustrated by the disappearance of the camera? Are they humans? This tension between mechanical and “human” seems to place Oscar and his ilk more in the mechanical pile. He’s more akin to the limos in the motorpool than he is to anyone saving up for a smaller smartphone.
So if the actor is a machine, yet another disappearing seamlessly into the fabric of everyday life … [insert trite “how do we know what is real?” exclamation here]. Perhaps this is part of the movie’s pan-cinematic matrix — cinema is bleeding into the world, to the point that the two are indistinguishable.
_________________________

All images courtesy of Indomina Releasing
Posted by Sam Stander at 12:15 PM