Today Is Not Like Today: Surrealist Language in 'Dogtooth'

Censorship is a powerful tool -- it limits imagination, potentiality, expression and agency. It can create stigma with a stamp, make moral judgments and draw boundaries with a thick line. Powerful censorship doesn’t always take the form of political power or pure prohibition -- it can appear in a remarkably insidious form through translation, an equation of meaning from one thing to another. Dogtooth’s title, the 2009 Greek film directed by Yorgos Lanthimos, is already a translation of signifiers, a colloquial version of canine teeth. The [d]ogtooth is significant because it is the harbinger of maturity and independence for three adult-children, who have been confined by their parents to the boundaries of their house’s property since birth. The eldest is a boy, the other two are girls who patiently, at least at first, wait for their dogtooths to fall out so that they can encounter the outside world. 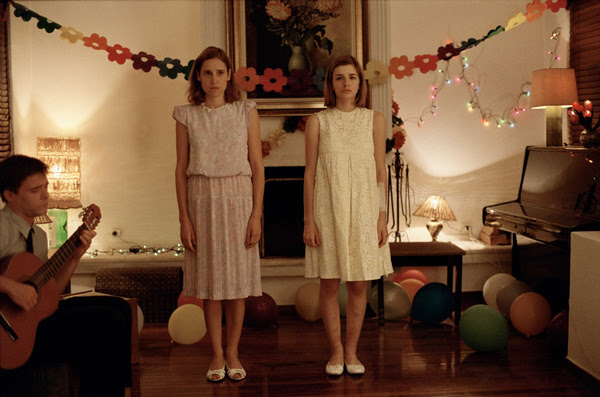 The world within the house is acutely defined through the parents’ rigid control on vocabulary. Words whose signifieds refer to the outside world are reassigned to refer to objects within the house, a boomeraging of linguistic signifiers back to the children’s immediate physical surroundings, so as not to even hint of concepts larger than “swimming pool” or “airplane”. A “zombie” is a little yellow flower, a “telephone” is a salt shaker. Questions of what-is and why-is are rigorously limited to familiar terms and objects, leaving outside objects that would otherwise be common or harmless taking the brunt of descriptors like fear, danger, mystery, threat. When a stray cat finds its way into the compound, it’s an opportunity to create fear in the mundane, as the father rips his own clothes and covers himself in fake blood to explain an encounter with the beast. The father is slipping certain words into his own children’s dialect, and making words like “swell” sinister and threatening.

The children, ignorant of all this linguistic substitution, live in complete surreality -- the pipe is not a pipe, cats are murderers, zombies are flowers. Words exist in stark authority over the physical world, as a method of parental control that is so ambiguous in its rationale and so pious in its application that you start to question the sanity of the parents themselves, rather than fault them. As restrictive as the use of language is, it pales in comparison to the application of sex -- as a biological energy to control and appease. The plot bends with the sexual drive of the oldest son, mediated by the father with the almost pharmaceutical prescription of encounters with a woman security guard from his workplace. He drives her to and from the house blindfolded and pays her for her compliance and silence (towards their agreement and with the son’s sexual preferences). It is when her sexual demands of the son are denied that she seeks satisfaction from others in the house, taking advantage of their malleable relation of signifier to sign. A lick becomes a lot more here, leading surreal censorship to upturn the family entirely.

Posted by Amelia Taylor-Hochberg at 1:16 PM